Wētā Workshop have named the New Zealand winner of the inaugural Incheon City Concept Design Competition. In first place is Ziyi Zheng from the University of Auckland, with runner-up Andrew Noble, from the Ara Institute of Canterbury, and third place going to Michael Vaughan of the YooBee School of Design, Christchurch.

Both Kiwi and Korean students were called upon to submit extraordinary pieces of sci-fi and fantasy art to the competition, with a once-in-a-lifetime trip to Korea and $500 USD worth of Wētā Workshop collectibles vouchers up for grabs.  Ziyi will fly with Wētā Workshop Co-founder and Creative Director, Richard Taylor, and competition runner-up, Andrew Noble, to Incheon City to spend a week immersed in creativity.

The ICDC – formerly the Gwangmyeong Concept Design Competition – invited tertiary students of all disciplines to bring to life a creative brief, set by Richard. Entrants were asked to illustrate an interstellar adventure and conceptualize a community where humans and sentient lifeforms coexist.

Having entered the competition for four consecutive years, Masters student Ziyi was this time prepared to traverse time and space through design. Approaching the brief with a backstory in mind, he imagined the first settlers of the planet, aliens, living in harmony with their environment and all its lifeforms. His zero-gravity, under-water world is filled with jellyfish-like life forms and giant dragonfly creatures that are used as a method of transport.

Blurring the lines between land and sea fascinates me. Combining land-based species and ocean-based species within the story was one of the most challenging but rewarding parts of the design. The competition gave me the opportunity to push my design ideas out. Every year, the brief from Wētā Workshop was open-ended and interesting. I’m super excited that all my efforts have paid off and I get to visit Korea.

A student of architecture, Ziyi’s winning work was heavily influenced by his favourite architect, Antoni Gaudí. His circular city contains nature in the outer ring and skyscrapers in the inner rings. The geometric, concrete buildings contrast sharply with the tactile, organic structures built by aliens. In Ziyi’s words, “Gaudí’s structures mimic nature, and do it elegantly. The buildings automatically feel quite alien-like.” To complete his extra-terrestrial world, Ziyi manipulated the sky colour and lighting properties, so light was reflected differently in the space.

Richard judged the submissions and was impressed by the quality of the work submitted.

We had the privilege to see some incredible design work from this year’s Incheon City Design Competition entrants, but ultimately it was the alien world conceptualised by this terrific young architecture student that captured our imaginations. Ziyi’s unearthly design evokes a wonderous sense of harmony between species, and his thoughtful consideration of alien influences on human settlers made a distinct impression. My heartfelt congratulations to our three winners, and sincere appreciation to all of the talented entrants.

This year's winning submission by Ziyi Zheng of Auckland University. 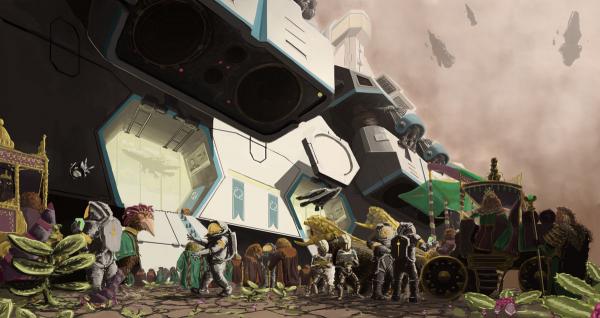