Working closely with director Dave Wilson, the New Zealand-based physical effects company helped build an array of weapons, combat vests, costumes and robotic arms for the film, and then worked with the actors and stunt team on set.

Vin Diesel stars as Ray Garrison in Bloodshot, based on the bestselling Valiant Comics book. Garrison is a soldier recently killed in action and brought back to life as a superhuman by a secret team of scientists. Enhanced with nanotechnology, Garrison becomes a biotech killing machine –without any memory of his previous life.

The film is available to watch on multiple digital platforms, 4K UHD, Blu-ray and DVD.

In supporting Dave Wilson to bring his vision of Bloodshot to life, Wētā Workshop helped him refine a number of costume and weapon designs before taking them to the workshop floor for manufacture.

Project Manager Jack Taylor says the robotic arms worn by the character Dalton, were some of the most complex costume builds the team had tackled. Each arm had more than 70 custom-made parts, which were joined together and able to flex, extend, swing or pivot. Multiple prototypes had to be made and tested, before the finished pieces could be sent to set.

At Wētā Workshop we are passionate about building costumes and props that not only look authentic but are also durable and practical for actors and stunt teams. Building the robotic arms was really challenging, because there was so many moving parts, but we were up for it!

“A number of our departments – from engineering to moulding and 3D - got involved. The arms needed to unfurl from a compact form on Dalton’s back, as well as move smoothly and freely for the actors and stunt people during action scenes. To test their performance, we decided to reenact a couple of key fight scenes in the film. Needless to say, these tests were full-on but fun!”

One unusual requirement was that the robotic arms, combat vest and undergarments could move fluidly when wet, for a combat scene originally scripted to be underwater. Production manager Rita Maxim says this meant the Wētā Workshop crew took their costume tests down to the local pool.

“The crew ended up in the community pool after hours, all costumed-up and doing combat scenes underwater - just as the actors, stunt team and puppeteers would have done on set. We needed to know the costumes wouldn’t get too heavy when wet and restrict people’s movements. It was as much about safety as it was about form and function. Doing this kind of wet test was definitely an unusual but awesome task!”

A similar research and development process was used to make the motorcycle helmet for the character called Tibbs. The Wētā Workshop crew needed to create two versions – one that could be used for close-up shots of the actor and another for stunt work with a safety helmet embedded inside.

The helmet’s design was multi-faceted and fully enclosed, so the crew experimented with different materials. Some of the front panels ended up being made from a perforated metal, which look solid to the viewer but are see-through for the actor. Other panels were removable for stunt work.

Tibbs’ helmet and Dalton’s robotic arms are great examples of the innovation and creativity that our team at Workshop bring to the variety of projects that we get to undertake each year. A huge thanks to Dave Wilson, for his faith in physical effects and giving us all the chance to test a bunch of new techniques and materials on his watch. It was a very special experience getting to work with him on his debut feature film.

The Wētā Workshop crew often filmed their tests in New Zealand, so Dave Wilson and the stunt team could watch them in South Africa and provide feedback.

Once the weapons and costumes were finished, members of the crew then travelled to set in South Africa, to make sure they performed just as needed during filming. In several key scenes, Dalton’s robotic arms were worn on set by the actors and stunt team. They were also used as a visual reference for the production crew and digital effects team. 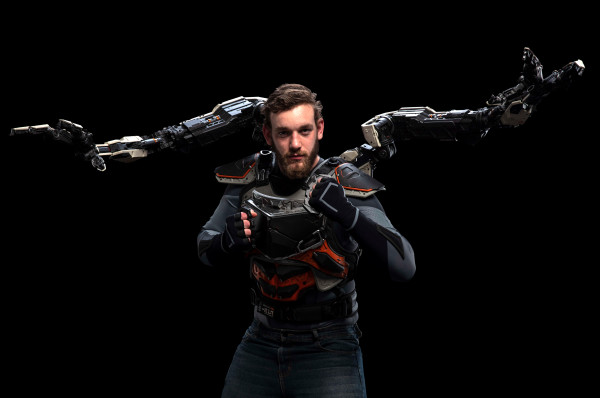 If you’re looking for a creative company to design or build your next project, we’d love to chat.